A Note on a Gun


Way back in Hobilar 49, I wrote a piece on the subject of a 'double-barrelled breach loader' having encountered an illustration of one in, among other sources, Froissart. 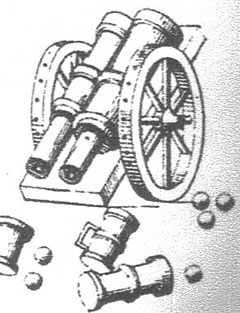 I recently found the same gun, "re-drawn". This time in a new reprint of Volume 2 of Oman's Art of War in the Middle Ages, page 182 should you wish to look it up. The drawing shown here is another example of how the representation of a medieval artist has been 'added to' by modern 'interpreters'. The drawing in Froissart shows the guns, mounted as here on a two-wheeled bed, side by side, and with half a dozen cannon balls just behind them. The guns are being used in a siege, and belonged apparently, to the Count of Hainault, in the original there is a hefty raised protective shield in front of them, lifted to fire the guns.


The drawing in Oman adds three breech-chambers, and the caption is altered to account for their presence, as though it was accurate. A pity, but it does pay to reflect on how often these alterations happen and are accepted.