The Socialist Government that until recently ruled Hungary always had a soft spot for Dozsa - and justifiably so. Wasn't he the leader of the Peasants revolt when the people of Hungary fought to throw of the oppressive yoke of their tyrant overlords.


Oh, yes, cliche and rhetoric ridden the story might be, but it is still a historical event - and it played a major part in the Downfall of Hungary at the battle of Mohacs in 1526.


The Peasant War of 1514 started because Tamas Bakocz didn't get his own way. He wanted to be Pope, and came close to being elected. But in the end despite all his bribes, dinners and parties he was passed over. But the new Pope made a gesture to the loser - making him his legate. In 1513 the Pope had a bull drawn up entrusting Bakocz with the task of declaring a crusade against the Turks.


Now Bakocz was a practical man and knew that the Hungarian nobility didn't want to go off and fight a war against the Turks. So he convinced the nobility that the peasants should be recruited to form an army - that they should place on their chest the "sacred cross, made out of scarlet cloth." He convinced the royal council and the nobles that a captain should be appointed to train and command the peasant crusaders.


He chose a Szekeley warrior named Gyorgy Dozsa as his commander. Dozsa had recently defeated Albanian Ali, a Turkish cavalry officer, in a duel and been rewarded by the King for his feat. Apart from double pay, a gold chain, a gold-embroidered scarlet suit, spurs and sword the king had drawn up a letter of nobility in which he made Dozsa lord of a southern village of forty serfs.


In the spring of 1514 Dozsa started recruiting. In a month he had 40,000 would be crusaders at his camp and this did not include those that gathered at other cities and camp sites.


The church and the nobility called them cruciatus - a Latin word that the Hungarians corrupted to kuruc, a name that would appear again and again in the history of Hungary.


Legate Tamas Bakocz and the nobles were surprised at the success of the call for crusaders. They had not expected the peasantry to take up the challenge of driving back the infidel in God's name. Neither the church nor the Crown was willing to undertake the task, why would the lowest of Hungarian estates be prepared to risk all, for no material reward?


Dozsa arranged his men into units but let them choose their own officers from their ranks. Then, with the aid of mercenaries, he began teaching them how to fight. We get a good idea of their weapons from the contemporary chronicle of Taurinus: "One has a sword, but the other seizes a scythe, the weapon of this is a bow, of that only a fast slingshot, and you can see how many merely with a flail: small hoes, large hoes also turn about in their hands. There are those, who by melting down the metal of hoe and plough, ardently hammer a new weapon out of this, but still most of them march only with a warped scythe: another uses a spade, one trusts in the crooked cudgel, some tie the harrow's nails, the breakers of crumbling clod, with steel straps to the grape's hardy pole.


Their captain was ready to lead them in a Holy Crusade against the Turks but there was dissension in the camps. The peasants heard rumour that the nobles were refusing to allow their serfs to join them in the crusade. Those that run away to join Dozsa left their families and children to be punished in their name.


The army had planned to march to Croatia where a Turkish army was besieging a Christian fort. But in May 1514 Tamas Bakocz send strict orders to Dozsa that he was to disband the crusaders. But the nobles and the church had woken up too late to the danger.


They began raiding manor houses, looting them and setting them on fire. The flames of the burning houses could be seen at night from Buda and Pest. Nobles quickly left their exposed estates and headed towards the capital.


Gyorgy Dozsa led his forces to Cegled where he sent word to every town and village. "You should come, hurry, and get to the market town of Cegled without delay and excuses, and be here according to duty, so that this sacred army and blessed gathering can force, restrain, and break the strength and power of those faithless and damned nobles."


It was a Cegled that Dozsa delivered his famous speech. One of the chronicles attributes him with the following: "The sun shines equally on men and beasts, but you are fortunate if the nobility allows this much for you. It is for them you are plowing the land, for them you are raising the flock and the herd: for you, only servitude and want remain. When the nobleman builds a house, gets married, married of his daughter, receives visitors, is born and dies, when he goes to the king for his own affairs - you are bled. When he celebrates, you mourn for it because he puts a tax upon you: this is how he gets the money he squanders. When he mourns, buries, you are paying for the funeral feast: you are the one then crying in earnest. Hungarians,how long will you tolerate this shame? Teach a lesson to these crazy brutes!" With a speech like that is it any wonder that the old socialist regime of Hungary loved him?


Dozsa left a sizable force watching Buda, whilst he took his army south across the Tisza. Three other kuruc columns burnt and plundered in other areas. For a moment the country was ready to fall into their hands.


Together Dozsa's peasants made a substantial military force - an almost irresistible force. But they lacked real leadership. Dozsa kept his own men in order but he could not control the whole army. Not that the serfs were a rabble. But they lacked a coherent strategy to enable them to win.


The kuruc burnt and looted but only from the nobility. They left the poor alone. A burgher in Buda wrote "These crusaders don't hurt the poor, they don't use force on anybody,and they pay cash for the food delivered to them." The first battle came when the serfs were heading through the market towns of the Trans-Tisza region towards the river Maros. They fought with the stronger, better armed forces of the nobles. The serfs had acquired some small cannons, but it was mainly strength of numbers that gave them their victory over the armoured knights. Dozsa had the captured leaders - amongst them the royal chancellor - impaled.


After their victory the serfs tied barrels together, laid planks and boards across them and built a bridge across the river Maros. They then marched across it, taking their cannons with them. They marched on and surrounded Temesvar.


But bad news caught up with them. The royal banderia had crossed the Danube and attacked the force Dozsa had left behind at Buda. They had cut down some, driven others into the river and captured the rest. Some of the prisoners were executed. Others had their ears and noses cut off and were driven home.


Dozsa however kept the army at Temesvar, believing that victory was still possible. The city was surrounded by a deep moat and Dozsa planned to reroute the river Maros, drying up the city's main defence. He set his men to work changing the course of the river, well back from the city's guns, whilst he kept the city under constant bombardment.


The garrison had given up hope when when in July 1514 Janos Szapolyai, Voivode of Transylvania, arrived at the head of his army. Szapolyai told the poor he understood their feelings and that if they left Dozsa no harm would come to them. All they had to do was put a green oak in their caps. But the majority of the serfs still believed in Dozsa and their cause and turned down the offer.


When the Hussites had fought armoured knights a century earlier they had erected wagon-forts,and fought from behind the protection of wooden walls. But the Hungarian serfs met Szapolyai's armoured knights in the open. Despite the disparity they held their own, until Szapolyai's light cavalry , the Szekely and border guards, put them to flight. It was everyman for himself. Some had brought their wives and children to escape persecution by the nobles and these suffered in the rout. Some serfs were drowned in the river, others captured and bound, but most of the army was cut down. 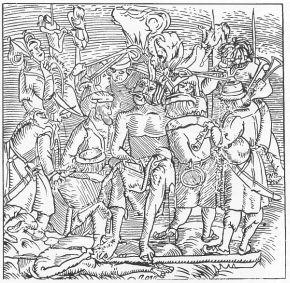 The peasant king Gyorgy Dozsa was wounded and dragged from his horse. A few weeks later he was tortured to death. He was made to sit naked on a red-hot iron throne and a glowing crown of tin placed on his head. He bore the pain in silence until nine of followers were brought in, and at sword-point were made to eat and swallow their leader's flesh. The only thing he said was "Cur-litter!". Then they tore and severed his body.


The Hungarian Diet passed laws that tied the peasants to the land permanently and reduced them from serfs to slaves. In the four months of the revolt some four hundred nobles perished. Some seventy thousands serfs died!


It will be interesting to see what the Hungarians think of him in the years to come.


To illustrate Bobs point this is a woodcut by the Hungarian artist, Gyula Derkovits (18941934). He was part of a group of left-wing emigrants in Vienna in the late 1920s and joined the Austrian Communist Party. His works reflected the influence of German expressionists and his political experiences, when his most significant graphic work, "1514", wood engravings inspired by the Dózsa peasant revolt, was finished. 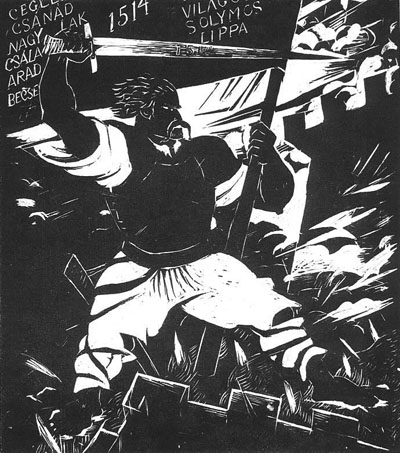