The Mystery of the Missing Trebuchet


As a prelude to writing up two wargame scenarios, one a siege, of Lincoln in 1217,and one a naval battle, Sandwich later that same year, I've been wandering through early twentieth century volumes of the 'English Historical Review' always a gold-mine for the adventurous medievalist. In 1903, T.F.Tout, followed in 1912 by Henry Lewin Cannon described the role, and fate of the Boulogne leader known as Eustace the Monk. Historically, Eustace has often been described (in English sources, admittedly) as a 'Pirate', even a 'Piratum Magister' or 'Master Pirate', by Matthew Paris. This was largely on the basis of having defected from the service of King John, to whom, up until he headed back to France, Eustace was a good captain, and a 'redoubtable pilot'.


He met his end when his ship was captured during the Battle of Sandwich on 24th August 1217, St. Bartholomew's Day. Most sources, including Tout and Cannon record the Monk (ex-monk may be more accurate) as aboard a 'Great Ship of Bayonne' which contained King Philip's pay-chest en route for Louis' army, now in difficulties after Lincoln. It also carried the leader of the French expedition, Robert de Courtenay, whose orders to Eustace at a critical moment cost the ship and the captain! The Bayonne ship was overloaded, with horses, nobles and a large trebuchet (a counterweight trebuchet in it's 'ready to assemble form'-not mounted for use at sea), which was destined for Louis. It was almost certainly captured because of being 'heavily laden' and 'so deep in the water that it's deck was almost awash'.


The French vessel was boarded, and 32 French knights and nobles were captured in a vicious struggle. The common soldiery went over the side. Eustace was found in the hold, and dragged out was given the choice by one Stephen of Winchelsea, of having his head cut off on the rail of the ship, or on the trebuchet. Anyway, Eustace the Monk was disposed of. But, what of the trebuchet?


According to Tout, and the other sources, Louis already had a trebuchet in his army. Though at Lincoln, where a number of stone throwers were in use there's some dispute over their nature, and Tout considers it carefully, with continental comparisons, deciding that the counter-weight trebuchet was not used there. However, Louis, without doubt, introduced the counterweight trebuchet into England, it came with his invasion force in April 1217. The first one saw action at Dover in May, and the second engine aboard Eustaces' overburdened flagship was an additional example for support. So, having been captured by the English flotilla under Hubert de Burgh, along with it's novel cargo, the Bayonne ship sails into history. The contemporary 'Histoire de Guillaume de Marechal' according to Cannon, describes the booty from Sandwich in great detail. Yet where did the captured French counter-weight trebuchet go?


Such a powerful and unusual weapon of war, newly encountered on their own soil by the English, who had been 'sore-pressed' by the French invaders and their allies, must have invoked far more than mere curiosity. Writing in the new 'Arms & Armour' Journal (vol. I No. 1 2004) Derek Renn suggests that after the Treaty of Lambeth in September 1217, Louis 'dismantled his trebuchet at Dover... and it was presumably repatriated with his troops to France', that seems likely, since this was the state of the art siege weapon, and of immense value to the French King.


There were remarkably few trebuchets around at that time, and the Princes and engineers of northern and western Europe were engaged in a steep learning curve in the use of this engine. Surprisingly, Tout suggests that in May 1217 at Dover Louis' engine achieved little, 'against the valour of Hubert de Burgh and the despair of his own side', and says '...it did no great harm'. No mention of the walls, or damage, but the psychological effect is hinted at, or rather the lack of it!


Renn says that the fate of Eustaces' trebuchet is 'unrecorded' and his suggestion that such a valuable weapon was 'recycled' cannot possibly be accurate. The other alternative suggested was that it became a copy or pattern, which since Master Jordan, the subject of Derek Renn's article was building two trebuchets in the 1220's one at Dover, the other at Windsor, must mean that Henry III, a long reigning and competent English King, had seen the engine for himself, and not as a pile of ready to shift lumber, but in operation.


Another prospect is that the Dover engine was made out of Louis' trebuchet captured at Sandwich; but the 'Dover project' of Master Jordan was started some five or six years after the Treaty of Lambeth, and the nature of survival in medieval war can't have permitted Henry to sit with the weapon piled in a storehouse for so long.


The motivator in all of Henry III's early trebuchet projects seems to have been Hubert de Burgh, who faced the Dover attack, captured the sea-borne trebuchet, and undoubtedly saw Louis' engineers dismantling their engine at the end of hostilities. Hubert knew a winning weapon when he saw it! He was Constable of Dover, almost continuously between 1202 and 1232 and later of Windsor, at the time when their respective trebuchets were being constructed by Master Jordan. 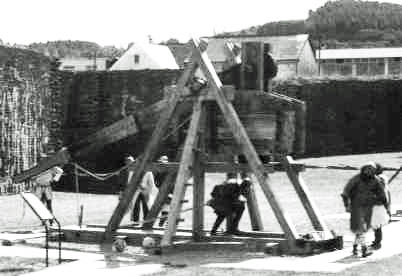 The mighty counter-weight trebuchet was cropping up across Europe by 1220, at the siege of Toulouse, at Avignon, where Louis by then King of France, used two of them in 1226, and in Aragon's conquest of Majorca three years after that. Interestingly, when Henry was besieging Mirabeau in 1229, it seems he borrowed a trebuchet from a Poitevin noble, Bernard de Rioux, for the purpose, even though he owned two, or three, of his own. This was, by 1217 the coming wonder-weapon, and a decade after the new device appeared in England for the first time, even a wealthy provincial baron could afford to build one.

The 'traditional' view of the trebuchet is as in the rather basic but straightforward drawing shown below. With a sling of adjustable length, and a big box of stones or earth as the counterweight at the opposite end of the throwing beam. This, of course is how the modern replicas such as those at Caerphilly, and at the MiddelAlderCentret in Denmark are all built. However, an alternative was frequently used by Medieval engine masters, who were known in Scandinavian armies by the delightful name of Magister Tormentorum and it's shown at drawing B. Sometimes a single large stone, or perhaps several, was secured to the arm, wrapped and roped into place. An old millstone might be used for example, or a gibbet-stone. 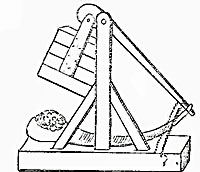 Only one wargames model is produced of a trebuchet as shown below, and that's in 15mm scale, by John Mitchell, and it will fit into 20mm scale at a pinch. It costs about 65p for a four part metal kit, and is A911 in their list. 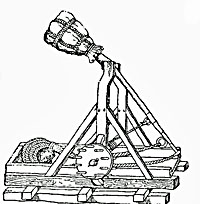