Often in History, all is not as clear cut as we might wish: the further back we look, the more obscure the picture and few things are more obscure than the origins of The House Of Wessex. In the Wessex tradition the later kings claim descent from Cerdic whose name is British (Caradoc) and this is the only Saxon dynasty to have definitely 'invented' antecedents and descendants. The Saxon records tell that 'Porta' (if he ever existed) came to Porta's Mutha with his two sons, Bieda (an English name) and Maegla (a British name), where he fought a battle in which a young British nobleman was killed, but with no claim of victory (c480). The British poem Lament for Geraint records what appears to be the same fight at Llongborth.


From this obscurity it may well appear that a possible Anglo/British House of Wessex had a hereditary claim to carry the Dragon standard, assuming that y Ddraeg Goch was carried by the leaders of the British forces as early as this. It is perhaps worth recording that The White Horse has a long association with North Germany (I believe it is still the canting emblem of Hanover), and that horsetail standards seem to have been associated with Germanic warbands, with no mention of dragon standards. As far as I know, the only contemporary illustration of a Saxon army using the Dragon standard is on the Bayeux tapestry.

The dragon standard has a long history however, being recorded as early as the 2nd century AD being carried by the Sarmatian armoured cavalry who so impressed the Romans in the Danubian wars of the second half of that century. Some 8,000 of these horsemen were taken into Roman service (5,500 in Britain), and by the 4th century the draco was the normal standard carried by Roman cavalry. 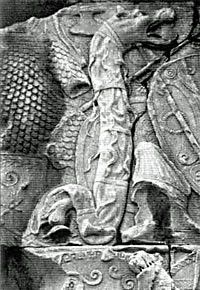 This standard according to contemporary descriptions and illustrations was of the 'windsock' type with a dragon head of metal, or wood. Carried by a horseman at speed, not only did the standard appear to writhe in the air, but created a roaring noise - very impressive! One might speculate on the type of banner that Arthur's horsemen might have carried - it may well have been of this type, but the sources, such as they are, tell us nothing.


I am no vexilologist, to debate the difference between a standard and a banner, or whether a standard was intended to remain in one position or be mobile. However, the standard ordered in 1244 was constructed, and it may well have been intended to be carried by a mounted standard bearer, it sounds very much like a political statement emphasising the royal position as ruler of England and the English in the line of the kings of Wessex, a statement perhaps as doubtful as that line's origins!