The Dulle Griet is one of Europe's most powerful extant late medieval weapons. It is in remarkable condition and I recently heard that the original red colour scheme remains. It was made in the mid 15th century for the House of Burgundy and has a very well documented history.


I have recently learnt that Ghent claims possession of a 400-year-old receipt relating to the gun. This is perfectly possible; the Oudenarde militia captured the gun in 1454 from the besieging army of Ghent. The heavy gun was left behind when they retreated. A century later, "She was recaptured and returned to Ghent". It was an early tourist attraction; John Evelyn visited Ghent in 1641 and wrote of the town's "monstrous gun". Having said all this I am a little puzzled why the gun is still in Ghent. Let me explain. 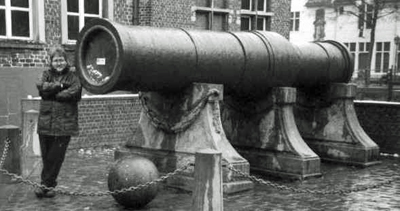 Dave Lanchester propped up against the ordnance in question. The original caption for the picture was: That's a big bugger! Oh, and the cannon is a bit on the large side too.


In March 1476 Charles the Bold lost at Grandson leaving a great amount of ordnance on the field. Some sources suggest as many as 400 guns. In June of that year he lost a further 200 pieces at Morat. In January of the following year, almost all the remaining Burgundian artillery was captured at Nancy when Charles himself was killed.


So Charles lost 600 guns in nine months, possibly more, and rebuilt his army twice. He undoubtedly sent home for reinforcements, equipment and artillery between the defeats of Grandson and Morat. We know that four Burgundian heavy bombards destroyed the southern walls of Morat before Charles was forced to face the Confederate relieving force. The extant Basel Bombard was fired and captured at Morat. By the autumn of 1476 Charles must have been desperate for guns. Nancy's Burgundian garrison capitulated on the 6th October. Charles had to recapture Nancy. To do this he needed large bombards.


So, why wasn't Dulle Griet sent for? Moving such a large gun was not an obstacle. Some of these guns required up to 100 horses, six or seven carts, and a team of 70 or 80 attendants, pioneers, etc. However, if you have the resources to move four such bombards you can move five. The House of Burgundy certainly had the resources.


I find myself wondering if somewhere in the town records of Oudenarde there may be a 400-year-old movement order that was never acted upon or was overtaken by news of the sender's death?