Issue No. 13 of the now defunct magazine, Medieval History contains a splendid piece by Stephen Turnbull on what he calls 'Fighting Cardinals'. It's an account of the military activities among others, of Cardinal Cesarini, killed fighting the Ottomans at Varna in 1444, and Henry Beaufort, Bishop of Winchester, John of Gaunt's bastard, given a red hat in 1427. Apart from some good illustrations and livery ideas generally, the piece also deals with War Wagons or mobile forts, of the type used by the Hussites and anti-heretic Crusaders (Turnbull's term).


Some are familiar, of the type shown in several editions of Osprey and readily available from manufacturers such as TTM, in my preferred 15mm scale. One is very different indeed, and worth comment-especially since it combines mobile fortification of sorts with my own first love of ordnance. It's reproduced here, thanks to Hamois UK, and comes from a facsimile of Das Mittelalterliche Hausbuch a 15th century volume which I have not consulted 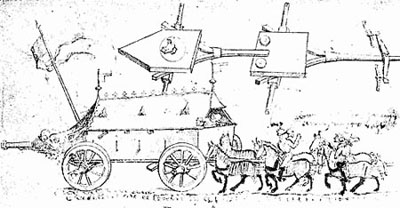 Take a look at the wagon. Drawn, or pushed by a 6 horse team with three outriders, so it's obviously a heavy cart; incidentally, it seems certain that the team would be reversed for normal movement, this is 'battle formation'. The cart is rectangular, mounted on two axles with heavy wheels, and is covered by a pitched roof, with the nice touch of gabled ventilation points. The roof is obviously solid wood, since it's well ornamented, with fleur-de-lis along the ridges, and embellished at each end with a small pennon. The ventilation would be essential because of the ordnance carried. No suggestion or indication of how it was painted or decorated, sadly.


There are four low keyhole type gun loops on each side of the wagon, and above them four open gun-ports just below the ridge of the roof, though only one hefty hook-gun is shown protruding.


The front of the wagon is substantial. A wedge shape, as can be seen from the axle drawing above, and with a large animal head at the front (I can not make out if this is a dragon or devil, even a boar perhaps). The curved face of the mobile fort may just possibly be metal covered rather than plain wood, and painted or gilded in order to give a 'furious face' as the Chinese would say.


The gun protruding from the creature's mouth is possibly a long culverin or, a long barrelled breech-loader, since the working of a muzzle-loading piece of ordnance might diminish the exposed gun team rather rapidly. Certainly the internal pintle mounting provides no evidence of a gun with trunnions, and suggests a lighter weapon, which would fit in with the mobility required and decreases the weight over the front axle. The gun could be withdrawn slightly for loading, then, run out, almost like an early port piece.


The last feature is a long swallow-tailed standard streaming from a spear, attached in some unseen way to the wagon, if painted this would be a very decorative war machine indeed, though it's a pity the arms of the owner are not shown.


As a model it is not difficult to make, apart from the 'face'. I found toying with a 20mm Airfix 'Wagon Train' covered wagon gave several possibilities for a 15mm example. Replace the axle under the box seat, into Miliput, and swap the wheels for four from the ACW Artillery set, or from a Lineside kit. Cut away the footrest and disguise the box by placing some of the storage boxes in the kit there. The four 20mm horses are suitable to be heavy horses in 15mm scale; they are really only ponies in 20mm, changing the riders of course.


The lower keyhole gun ports can be represented by lines of paint and pins inserted into the wagon side, while the upper gun ports can take the 15mm Hussite handgunner's weapon from TTM, place the soldier at the very rear to show the wagon is crewed. The gabled roof from plasticard, and the small ventilation points from thin card or paper. Disguise the ridge by a strip of paper, and add pins for the end-pieces. The 'face' is the only real problem. I actually rooted around in the kid's old toy box and found a dinosaur model, a Triceratops, frilled head, three horns, very diabolical, which overlapped the wagon sides a little just as the drawing suggests. My modelling skills were barely put to the test cutting the head off the dinosaur, and slanting the wagon sides and roof to match. I drilled out the mouth of the head and inserted a length (1cm protruding) of gun barrel. I didn't want to waste a wargames gun, so I used thin straw of the sort you get with those soft drinks in packets. I did not bother with the spear and banner, but that's easy enough too.


Since the inspiration came from an article about Cardinals, I sprayed the wagon sides and roof red, with black wheels and gilded ornamentation. The face looked fine in red too, with painted eyes, etc. Largely a matter of taste, depending on your choice of creature-or rather what you can find!