With Milan secure in his hands, the French King Francis I busied himself with other matters, notably the invasion of Navarre. When that opportunistic enterprise ended in disaster at Pampluna on 30th June 1521 Francis found himself faced with war along all his borders. From the north, where the Emperor Charles Vs forces were besieging Mouzon and Mezieres, to Bayonne, where the victorious Spanish had pursued the wreckage of the Navarrese adventure.


This would have been a highly inopportune time to commence operations in Italy, but for the existence of Franciss forces in the Milanese. Commanded by Marshal Lautrec these were in reasonably good shape and in a position to deal with the Imperialist armies piecemeal. The alliance with Venice still held, although what reliance could be placed upon it was debatable.


The troops ranged against the French were a cosmopolitan lot, consisting of a Papal contingent under the Marquis of Mantua, a Florentine corps, all the Spanish that could be spared from Naples and a body of Germans that had slipped through Venetian territory. The supreme command was given to the old condottieri Prosper Colonna, although the shaping of strategy and leadership in battle were heavily influenced by the highly capable, Marquis of Pescara.


Colonna was a man of caution, who preferred manoeuvre to headlong charges and who accepted battle only when needful, and when he had placed all advantages on his own side. All through the summer of 1521 he marched and evaded, and when winter came had the satisfaction of turning Lautrec out of a strong position on the river Adda, and forcing him to retire into Milan itself. A brilliantly successful night assault on the city drove Lautrec out to Cremona; his army reduced to barely 12,000 men.


During the winter Lautrec was reinforced by 16,000 Swiss, the 3,000 Italians of Giovanni de Medicis condotierri band, fresh gendarmes and French foot. A sizeable contingent of Venetians also mustered for the 1522 campaign. Colonnas force, although augmented by more Germans, was significantly outnumbered.


Lautrec began by retaking Novara, and then moved on to besiege Pavia, knowing that Colonna could not allow such an important city to fall without an effort on his part. The Imperialist responded by fortifying himself into the Certosa monastery on the Milan-Pavia road, threatening Lautrecs communications. So strong was the position that the Frenchman decided that his best option was to cut Colonnas communications in his turn and hope to force him out without a fight.


Colonna fell back on an equally formidable position, the Park of Bicocca, about four miles north of Milan. Lautrec resolved to repeat the tactics of Certosa. The result may well have been the same, but for the Swiss. Having gone unpaid since arriving in Italy, they went on strike. As they were the single most important element in the French army Lautrec was forced to temporise. What he could not have expected was that the Swiss would present him with an ultimatum to the effect that he either attacked Colonna on the following day or they would march home! They were perfectly ready to lead the assault, they said.

The Park of Bicocca contained a large country house surrounded by ornamental gardens and drainage ditches. To the west, marshland made movement of troops impossible. On the north front, along a sunken road, Colonna had thrown up an embankment, into which he had built gun-positions. His Spanish arquebusiers, four deep, were posted along the rampart, backed by solid blocks of Spanish and German pikemen. The front was only 600 yards long and there were ample troops to hold it and form reserves. The cavalry were held well back out of cannon-shot and some were sent to form a guard at the Milan road bridge. The nature of the ground, soft and muddy, meant that the French could not get their artillery close enough to damage the defences.


A strong reconnaissance on 26th April by 400 French horse with infantry support gave Colonna warning of the impending assault. The Imperialists had received assistance from the newly reinstated Duke of Milan, who was now guarding the flank and rear of the position with some 6,000 men. The reconnaissance reported that the ground was very difficult and criss-crossed with drainage ditches. The information had no effect whatever on the Swiss.


The assault opened with Giovanni de Medicis Black Bands clearing the ground of Spanish genitors. The main assault force, two huge blocks of Swiss pikes, each 4,000 strong, plus some light guns, formed up opposite the sunken road. Pedro Navarros engineers were to accompany them to fill up the drainage ditches.


Lautrecs brother, Lescun, was ordered to take his body of horse, with that of Pontdormy, down the Milan road to try to get in behind the position if possible. Lautrec himself held the main body back behind the Swiss, while the Venetians, under the Duke of Urbino, were in rear and to the right of him. Command of the Swiss was delegated to the Sieur de Montmorency. Since, however, the pikes would only obey their own captains the command was, at best, nominal.


The two Swiss pike blocks advanced at a rush straight at the Imperialist entrenchments, ignoring orders to wait for the artillery. The two columns were obviously competing with each other to see who would be first into action. The Imperialist artillery blew huge gaps in their ranks before ever they reached the sunken road and when they arrived it was to find that the trench was so deep, and the rampart so high, that it brought them to a dead stop. 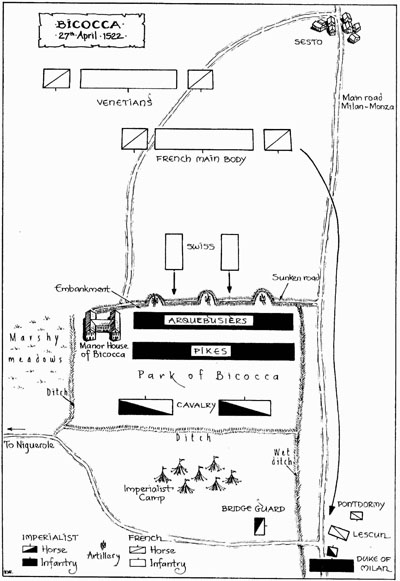 Nothing loath, the heads of the columns scrambled down into the sunken road where they were greeted by four withering volleys of arquebus fire. It is said that the entire first four Swiss ranks went down, including all the standard bearers. The remainder pressed on bravely. Those who reached the top of the rampart were charged by Spanish and German pikes and hurled back into the trench. After half an hour of desperate attempts the Swiss gave up and retreated, leaving 3,000 dead behind them.


Meantime, Lescun and his 400 gendarmes had managed to force the bridge at the rear of the park and had penetrated into the Imperialists camp. This caused some panic in Colonnas rear, but the main attack had failed and the Imperialist horse had faced about. Lescun only managed to cut his way out again with the help of Pontdormys detachment. 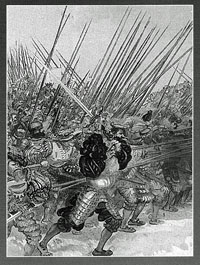 The Imperialist generals, seeing the enemy in retreat, begged Colonna for permission to counter attack. He refused point blank, remarking that the enemys second and third lines were still intact. Moreover, he prophesied, the Swiss would march home the following day, leaving Lautrec so weak in infantry that he would be forced to retreat. He was entirely correct. The French fell back into Venetian territory and finally reached Cremona.

This is a battle that should never have been fought. Lautrec certainly had not intended to fight and, from his point of view, the arrogance and overconfidence of the Swiss had wrecked his eminently reasonable strategy. Even his tactics for the battle, which originally included a secondary attack on the eastern side of the park to coincide with the frontal assault, were undermined by the insubordination of the Swiss, who refused to wait for it to get into position.


If it did nothing else the battle finally cured the Swiss of their overweening self-confidence. They lost most of their experienced captains in the action and were never the same fighting force again. As for Colonna, he fought exactly the battle he had planned and his decision not to allow his troops to pursue the beaten Swiss was undoubtedly the right one.