This short article looks into the Dragon Standard and various musings on the hearldry for The Barons War article in Hobilar 59.


From the description of the Dragon Standard and the fact that it was made by a goldsmith makes me wonder if it could actually have been of a three-dimensional modelled form as used by the Anglo-Saxons. This possibility is reinforced by the fact that its tongue was 'to appear as though continually moving and its eyes of sapphire or other stones...'. Not easy to achieve on a two-dimensional flag! If this supposition is correct, the mention of 'red samite' is more difficult to understand, but the basic shape, say of leather, could have been covered in this material. Samite is described as a 'costly silk, frequently with threads of gold or silver.'


One work suggests: 'The famous Dragon standard of Wessex, which is said to have been carried by Cuthred at the battle of Burford in 752, Edmund Ironside at Assingdon in 1016 and Harold on the Senlac ridge in 1066, was probably fashioned from rigid leather and would have been similar in appearance to a gilded weather vane.'


There is also: 'Other, perhaps more ancient sources record that the attributed arms of Wessex were, in fact, a Dragon Gold, some even suggesting that the West Saxons of Cerdic adopted an existing British device to mark their "obtaining" the kingdom from the previous rulers. The Golden Dragon banner had a long and honourable history. It was, perhaps, the ensign of the Britons alluded to in the ninth century by Nennius in his Historia Brittonum; it was flown by Harold's forces at Senlac Hill in October 1066 and is shown in the Bayeux tapestry. In the twelfth century Robert Wace of Jersey in the Roman de Brut says that Arthur wore a dragon crest. Written off by G. K. Chesterton for the sake of a rhyme in The Ballad of the White Horse in the lines "Gored on the Norman gonfalon, The Golden Dragon died" the banner in fact went on crusade with Richard I, was raised at Crecy by Edward III's army and flew again at Agincourt.'


Although I can find no definite proof one way or the other, all this seems to suggest that the 'dragon' was some sort of three-dimensional object rather than the banner very well illustrated in the Hobilar.


Incidentally, the Saxon 'dragon' is in modern English heraldic jargon actually a wyvern, which has two legs, a dragon having four. The latter is a modern development unknown in the earlier medieval period. In continental heraldry a dragon usually still has only two legs. Fr. Dragon; Ger. Drache; It. Dragone.


Another possibility is that the dragon flag (if it was a flag) could have been shaped like a standard rather than a banner:

A long tapering flag would seem to be more suitable for a wyvern/dragon than the square or oblong banner. I can find no evidence for this and simply offer it as a hypothesis.


Historical flag nomenclature is notoriously inexact and confusing, as the same word can be used for different shapes of flag and a similar word does not necessarily denote the same thing in all European languages. The standard as understood in its modern and later medieval meaning did not exist until the reign of Edward III.


This is only conjecture, but I should think the 'standard' that was fixed to a cart at the battle of the Standard in 1138 would most likely be in the form of a gonfanon, fixed either to a cross-bar and hanging vertically or a stiffened square flag with two or more tails. It is unlikely to have been heraldic at this early date. 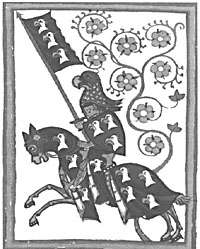 An oblong banner, longest in the hoist than the fly, would undoubtedly be the most practical form for a horseman to carry. With the increasing use of quarterings in the late fourteenth century the less convenient larger and squarer banner evolved to accommodate these. There are several examples in the early fourteenth century German Manessa Codex of charges shown 2.1. on the shield but in pale on the oblong banner.